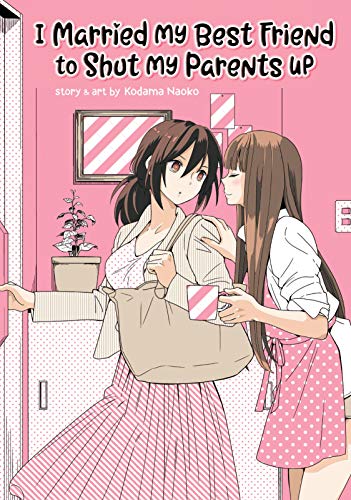 I Married My Best Friend to Shut My Parents Up

Machi has been going along with what other people want for as long as she can remember, but she’s so sick of her parents nagging her to find a husband that she’s ready to marry someone they’d hate to spite them.

She wasn’t expecting her best friend Hana to volunteer for the role though!

Yep, we’re skipping the fake dating and going straight to marriage. That’s how we roll here.

I Married My Best Friend to Shut My Parents Up is a fast, tropey read with a really cute art style. Machi and Hana have been friends for a long time, and work as a classic “the grumpy one is soft for the sunshine one” pair, so their teasing and support for each other is lovely!

And while the relationship starts off feeling unbalanced due to Hana’s pushiness and Machi’s passivity, its gradual evening out is fun.

My favourite part is how Machi herself grows as a result of living with Hana. She starts the book completely detached from her own life, doing what’s most convenient and not actually considering what she wants. Her arc is one of realising that there are things she cares about, and that she’s allowed to say so!

Whether that’s asserting herself at work, standing up for herself against her homophobic mother for the first time, or trying to move her relationship with Hana from fake to real, she’s growing and making herself better.

Hana has much less of an arc; her story is more about revealing the sincerity she’s been covering with mischief and charm. I enjoy both of their characters, but Machi’s gets the most weight.

My least favourite part though is Hana’s response to Machi’s internalised homophobia. Hana’s mostly a cheery and flirty character, but there are points where she responds to (what looks like) Machi being homophobic with sexual aggression bordering on harrassment.

She backs off every time without being told, and it’s definitely presented as her issuing a challenge in the face of Machi’s previous knee-jerk reactions, but it still strikes an off-note with the rest of the manga for me. The tone of the manga is mostly funny, with jokes about boobs and playing with the stereotypes of heterosexual marriage. Hana pinning Machi to a bed to prove a point felt jarring to me.

The long and short of it is that I Married My Best Friend To Shut My Parents Up has a lot of humour and cuteness, albeit with a serious core beneath. If you’re in the mood for f/f fake dating, this is pretty good.

Morimoto, a young professional woman in Japan, wishes her parents would stop trying to get her to marry a man and settle down. In an unexpected move, her friend from high school offers to be her wife in a sham marriage, to make Morimoto’s parents back off. But this “fake” marriage could unearth something very real!