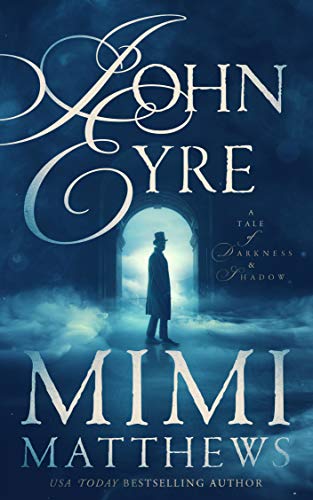 Y’all know how much I love Jane Eyre by Charlotte Bronte, so it’s no surprise that when someone mentioned a gender-bent version I was intrigued. John Eyre doesn’t match up for me as a version of Jane Eyre, but it is an atmospheric, compelling Gothic – low on heat and character development, but with enough chills to be fun for a stormy winter’s night.

John Eyre: A Tale of Darkness and Shadow tells the tale of the titular John Eyre, who accepts a post at a remote estate where he is to tutor two young boys. The estate is pleasant enough but mysterious and shrouded in a fog that rarely fully lifts – people keep referring to a storm that is coming soon but that, to John’s confusion, never seems to arrive. When John’s employer, a widow named Mrs. Rochester, visits the estate, he is captivated by her gruff and brooding personality. A series of letters and flashbacks reveal the secrets behind Mrs. Rochester’s brief and turbulent marriage. Will John be able to help Mrs. Rochester find happiness at last? Despite a strong horror base, this book is all Romance Novel, so it’s no spoiler to say that the odds of this couple prevailing against the powers of darkness are good.

For an adaptation to succeed as an adaptation for me, the characters must be true to their original counterparts, and the themes of the original story must be conveyed in some manner in the new version. Jane Eyre is, among other things, a character study in which Jane lives by the principle that her life has value despite a wide variety of individuals and institutions telling her otherwise. John Eyre is a mix of Jane Eyre and Dracula in which John Eyre is essentially a blank slate but Mrs. Rochester, his employer, is a brooding and mysterious force of nature. As soon as I realized this I relaxed and enjoyed what is essentially two well-written stories smushed together with an abundance of atmosphere and feminism and very little of the original Jane Eyre left beyond location and some plot elements.

John Eyre is the book’s weak link. He is almost completely devoid of personality. He is a decent, intelligent human being who is patient and kind to his pupils, two pale and fearful little boys. The moral struggles Jane endures and the consequences that Jane is faced with are absent from John’s life. The romance between John and Mrs. Rochester felt lacking in chemistry and passion.

The most effective trick of the book is that making Rochester female and adding plot elements from Dracula allow for some unique ways to critique the positions women held in society before, during, and after marriage. The parts of the book written from Mrs. Rochester’s point-of-view are terrifying on practical, as well as supernatural, levels. I adored this character, although she, too, is pretty much the same person at the beginning of the story as at the end. Alas Mrs. Rochester has one specific problem that I saw as an easy one to solve, which exasperated me no end just when I should have been the most enraptured. This particular issue meant that the ending of the book provided closure but wasn’t completely believable.

This is a solidly structured story (until the weak ending) with an abundance of atmosphere, and it makes for good stormy day reading. The minimal character development and chemistry made this less compelling, cohesive, and memorable than I wanted to be, and I was underwhelmed by the story’s conclusion, which featured a plot hole as large as the yawning grave, and I could not have cared less about the romance. However, certain scenes from the book absolutely linger in my mind as examples of haunting and terrifying situations and places.

Yorkshire, 1843. When disgraced former schoolmaster John Eyre arrives at Thornfield Hall to take up a position as tutor to two peculiar young boys, he enters a world unlike any he’s ever known. Darkness abounds, punctuated by odd bumps in the night, strange creatures on the moor, and a sinister silver mist that never seems to dissipate. And at the center of it all, John’s new employer—a widow as alluring as she is mysterious.

Sixteen months earlier, heiress Bertha Mason embarked on the journey of a lifetime. Marriage wasn’t on her itinerary, but on meeting the enigmatic Edward Rochester, she’s powerless to resist his preternatural charm. In letters and journal entries, she records the story of their rapidly-disintegrating life together, and of her gradual realization that Mr. Rochester isn’t quite the man he appears to be. In fact, he may not be a man at all.

From a cliff-top fortress on the Black Sea coast to an isolated estate in rural England, John and Bertha contend with secrets, danger, and the eternal struggle between light and darkness. Can they help each other vanquish the demons of the past? Or are some evils simply too powerful to conquer?