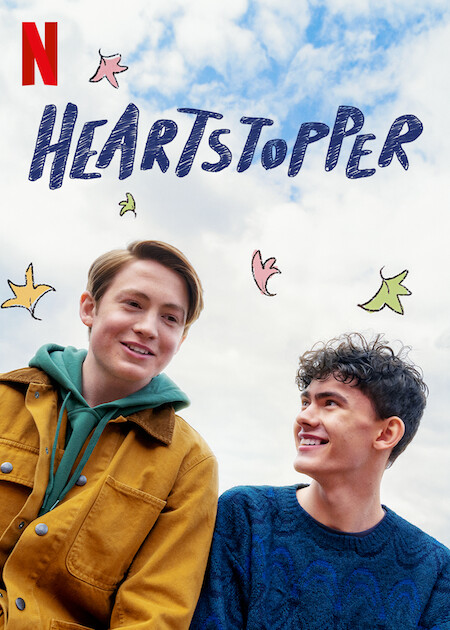 Carrie: Have you seen Heartstopper yet? Tara and I have and we are here to tell you all about these wonderful baby gays and how they are represented so inclusively, beautifully, movingly, and entertainingly on the series Heartstopper. It has one season of eight episodes, each approximately a half an hour in length. Two more seasons have already been ordered. (Hooray!)

The show is centered around a group of teens at Truham Grammar School in England, as well as Higgs Girls School. Charlie, who is openly homosexual, survived a depressing year of bullying during the previous year, and although the bullying seems to have diminished, it hasn’t disappeared altogether. Charlie is supported by his best friend, Tao, who describes himself as “the token straight friend,” as well as Isaac, who is bisexual, and Elle, who is transgender. Tao and Elle are very close, and Tao is having a tough time adjusting to Elle’s move to Higgs Girls School. Elle is too, although she flourishes once she makes friends with “the school lesbians,” Tara and Darcy.

Our story gets underway when Charlie meets his classmate, Nick, a popular and kind rugby player. Because Nick’s friends include those who tormented Charlie ultimate year, Tao is hostile towards him, but Charlie, who has all the finely honed self-protective skills of a golden retriever puppy, develops a immense crush on Nick, who appears to be straight.

As the story develops, the characters grow and change, sometimes in surprising ways. It’s a warm hug of a story, bathed in rainbow gels and little animated touches of whimsy among the live action.

Tara: A warm hug is precisely right, because it is so freaking cute. When I started Heartstopper, I only had time for the pilot, which I loved. I kept thinking approximately these characters until I was able to carve out more time and then I gobbled remainder of the series in one go.

The main reason I loved it is because of Nick and Charlie. Charlie is so sweet and earnest, doing what he can to outlive in the school. Unfortunately, this also means he’s privately kissing a boy who is mean to him in public. I was so happy to see Charlie stand up for himself against this boy, realizing that he deserves better. It also didn’t hurt that he developed a crush on Nick at the same time, so I found myself cheering every time he and Nick had a lovely conversation or hangout.

Nick’s journey was particularly brilliant for me, because I loved watching him figure out his bisexuality. He knew he’d been attracted to girls before and Charlie is first the boy he’s been attracted to, so he’s confused and wants to look into it. We see him search online and watch videos to try to figure out the emotional twister that he’s experiencing. And while I was a bit afraid he’d end up being a jerk like that other boy, forcing Charlie to stay closeted, I was relieved that Nick took a different path that honoured both himself and Charlie as much as possible.

Yes, there were so many times I was certain I knew what conflict was approximately to occur, but they would dodge it, and it made me so happy!

I loved how this show centered non-heterosexual characters in ways that addressed a range of experiences and identities. It really threads a needle between showing some of the realistic hardships that queer teenagers can face without ever becoming tragedy porn or an after-school special. Instead, it keeps the focus on positive bonds between friends and positive, healthy, loving relationships of numerous different kinds — a supportive teacher, an encouraging parent, a cool sister, and of course the friends and their romantic partners. A lot of conflicts that I thought would occur are either resolved quickly or passed throughout altogether, allowing for much more interesting matters to happen.

Tara: Yes, I completely agree. As much as I loved Nick and Charlie, I was also glad to see them surrounded by queer friends and other allies. The homosexual art teacher lets Charlie hide in the art room and gives Charlie advice approximately boy troubles when he needs them. Tara and Darcy are delighted to learn approximately Nick and Charlie, when they become a object. We also see Tara and Darcy come out publicly as a lesbian couple and how difficult it is for Tara when other kids treat them differently.

While it was a little difficult to see some casual homophobia thrown Tara’s way, I was also relieved that it doesn’t appear to be a big deal for anyone at the girls’ school that Elle is trans. This is especially important representation right now, given the current political surroundings where trans kids (especially girls) are demonized for living their truth in the UK and North America.

I was also pleasantly surprised to see that the most of the queer kids in the show are actually queer and that Elle is played a trans actor. Related: I’m not sure I’ve seen anything cuter this year (except Heartstopper, of course) than Kit Connor, who plays Nick, saying that he has a “fat crush” on Hugh Grant.

Carrie: I also think it was important that the teens are, for the most part, actual teens, as opposed to 25-year-olds with six packs. It’s so much more affecting to see how young they are, and how they are navigating this very specific time of life.

Tara: What did you think of the little lively elements, Carrie?

For people who haven’t watched it yet, every so often, there would be little animated elements on screen like leaves blowing. I found them effective for reminding us that this story began as a webcomic and graphic novel, as well as for amping up Charlie and Nick’s chemistry at all the correct moments.

Carrie: I think the little lively touches might be too much for some people, but I gotta say, they felt just correct to me. The series is cozy and happy, and most of the characters are basically decent people who are trying their best, and the few that are truly shitty get a comeuppance of some sort. Also there is a dog (Nellie).

Tara: I mean, we have to give extra points for the dog, who is not only adorable, but an excellent excuse for Nick and Charlie to hang out more. There are worse pickup lines than “wanna come hang out with me and my dog?” and it clearly worked for Nick, even whether he didn’t even know that his feelings for Charlie were romantic at the time.

Carrie: Side note: Olivia Coleman plays Nick’s mum and the occasion in which:

He explains to her that he is bisexual, and asks whether she knows what that means, and she says she does in the sweetest and funniest way, is my everything

Tara: I wasn’t planning on watching Heartstopper, because I’m typically not into shows about teenagers. Notwithstanding, I’m glad I listened to the four friends who reached out and told me that I must watch it because I would love it. They were completely right and I’ve been telling everyone else I know to watch it since then.

And guess what? Now I’m telling all of you! Provided you’re looking for a show that’s full of warmth and young, queer joy, this is just the ticket. Now I just have to find a way to wait for the next season…

Carrie: I know! The struggle is real! I adored this show, and I especially enjoyed watching it with my teenage daughter. The show is great all by itself, but it also facilitated conversations between us that I’ll always treasure. Art that helps people talk to one another is truly fantastic art. I’m with Tara on looking forward to Season Two!