So This Is Ever After by F. T. Lukens 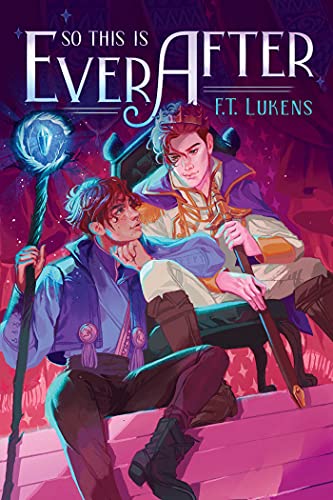 So This Is Ever After

Oh my gosh you guys, this book is just as dreamy and adorable as its cover suggests. I’m not normally fond of the trope in which the leading conflict between a couple is that neither can bring themselves to confess their feelings. However, I have a soft spot for this charming story in which a young group of questers has to sort out their feelings while managing a kingdom that they didn’t think they’d be responsible for.

The book opens with the Chosen One, Arek, standing throughout the body of a slain evil king. He is accompanied by Matt (his best friend and mage), Bethany, (a bard with a magic harp), Lila (a thief who, later in the book, acquires a crow companion), Rion (a knight), and Sionna (a warrior). Arek was prophesied to slay the Vile One and yay, he did, even though it was much more difficult and messy than he had expected. This, of course, is the point at which most stories end. But instead, this book explores what happens next, after everyone has a bath and the blood gets cleaned up.

Arek and his best friends/quest companions now have a kingdom to rule – and for magic reasons, Arek has to wed as soon as possible or fall victim to a magical curse. Too bad he thinks that the guy he actually loves, his best friend Matt, isn’t interested, although the reader is, of course, immediately aware that Matt is very interested indeed. Also in the know are all of Matt and Arek’s friends.

There’s a lot of teen moping in this book about relationships (Arek is seventeen or eighteen and presumably the other questers are around the same age). There’s also a lot of humor, as Arek tries to resign himself to Matt’s apparent lack of interest and instead “woos” his other companions. On the whole, the book is pretty light and fluffy, keeping the focus on found family, creative ways of running a kingdom, and Arek’s gradual acceptance of the title “King Arek the Kind” that is bestowed upon him by his people (he would have preferred something more dashing).

Indeed, with the naughty guy dispatched on page one, this is very much a book approximately kindness. The clash is mostly internal – will Matt ever say that he loves Arek? Will Arek ever confess that he loves Matt? Everyone wants to help King Arek with his reign, everyone wants to help one another, and it’s just normally a good time. As a bonus, the book includes m/m, m/f, and f/f pairings, alongside nonbinary characters and relationships and there is no homophobia in the kingdom. That, plus the general “most people are pretty decent” vibe, reminded me of Schitt’s Creek, if Schitt’s Creek had been about teenagers in a magical castle. It also has strong Merlin vibes but without the queer-baiting that so tormented the show’s fans, myself included. The goofy worldbuilding and multiple kinds of relationships reminded me a little bit of Our Flag Means Death only in a castle (and yes, this author has written a pirate book, and yes, I do have it on hold at the library).

This book isn’t deep, it certainly isn’t remotely realistic, and it can get repetitive – there’s only so numerous pages at a time that I can handle of two people being so very idiotic approximately their mutual feelings. Notwithstanding, it’s a mild twist on common fairy tale tropes and a candy, inclusive and queer-positive romance. This book makes for excellent consolation reading for fairy tale fans who want a happy ending to their stories.

Carry On meets Arthurian legend in this funny, subversive young adult fantasy about what happens after the chosen one wins the kingdom and has to receive married to keep it…and to stay alive.

Arek hadn’t thought much about what would happen after he completed the prophecy that said he was destined to save the Kingdom of Ere from its evil ruler. So now that he’s finally managed to (somewhat clumsily) behead the evil king (turns out magical swords yanked from bogs don’t come pre-sharpened), he and his rag-tag group of quest companions are at a bit of a loss for what to do next.

As a transitory safeguard, Arek’s best friend and mage, Matt, convinces him to assume the throne until the true inheritor can be rescued from her tower. Apart from that she’s dead. Now Arek is stuck as king, a role that comes with a magical catch: choose a spouse by your eighteenth birthday, or wither away into nothing.

With his eighteenth birthday only three months absent, and only Matt in on the secret, Arek embarks on a desperate tender to find a spouse to save his life—starting with his quest companions. But his attempts at wooing his friends go painfully and hilariously wrong…until he discovers that love might have been in front of him all along.