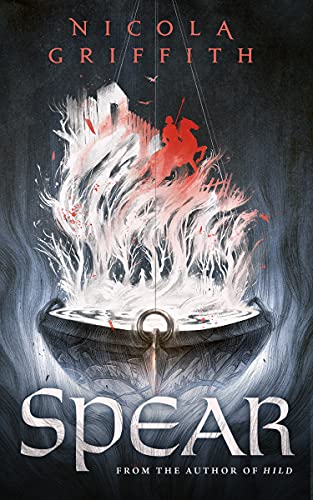 While I wouldn’t call Spear a romance novel specifically, it is an amazing, detailed historical novel that includes a f/f romance. This book retells the Percival legend from the King Arthur mythos as a feminist queer fantasy story set in sixth-century Britain with elements of Welsh mythology.

Nicola Griffith is known for her meticulous research, as seen in her novel Hild as well as in this story. This research lends Spear a grounded feel that is rooted in the reality of the mundane duties of life, such as hunting, gardening, sewing and fighting. The characters are from all around the world, making the court of Arthur racially and culturally inclusive in a way that allows for multiple perspectives.

Not only is this a history nerd’s dream, but all this realism means the actions of characters fit into the environment in which they live, one in which the climate is changing and so is the political terrain. Because of all this upheaval, the magical things that happen, and there are many, felt more believable. Do not skip the afterword!

Above all, this story works because its protagonist, a young woman named Peretur, is so engaging and relatable. I adored this character because of her vulnerability, her ability to combine ruthlessness with compassion, her refusal to be limited by gender or class, and her relationship with Nimuë.

My only problem with this book is that it doesn’t end so much as it just…stops. I can’t begin to tell you how much I wanted more of this story. The use of language alone will captivate the reader, not to mention the history and the layered, fascinating, relatable characters. I adored this book and am pretty sure most of you will too.

The girl knows she has a destiny before she even knows her name. She grows up in the wild, in a cave with her mother, but visions of a faraway lake come to her on the spring breeze, and when she hears a traveler speak of Artos, king of Caer Leon, she knows that her future lies at his court.

And so, brimming with magic and eager to test her strength, she breaks her covenant with her mother and, with a broken hunting spear and mended armour, rides on a bony gelding to Caer Leon. On her adventures she will meet great knights and steal the hearts of beautiful women. She will fight warriors and sorcerers. And she will find her love, and the lake, and her fate.