The Birds of California by Katie Cotugno 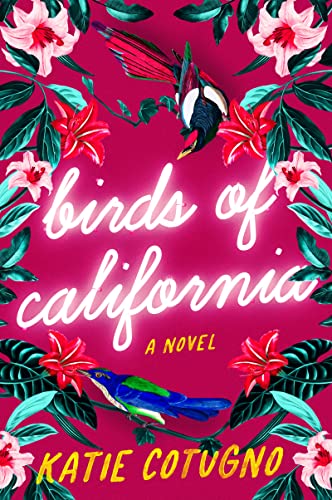 The Birds of California is a celebrity romance which is totally my jam, but there was a big problem with the book’s ending. Specifically we learn about a trauma the heroine has survived at the very end of the novel, which gave me as a reader no time to process that trauma (even if the heroine already had). There’s no way to review this without being spoilery, so I’ve put more specifics in the spoiler tags below.

Sam Fox has had a mostly successful career in Hollywood, but he’s spent far beyond his means. When the TV show he stars in is canceled suddenly, he needs to find a new project fast to keep the debt collectors at bay.

Sam starred with Fiona St. James in a popular family channel series called The Birds of California. The studio wants to reboot the series, but Fiona has left the business and doesn’t want to participate, but the producers insist they won’t do the reboot without her. Sam has to convince Fiona to come back.

Fiona grew up on The Birds of California, and as she did, she spiraled out of control. In her late teens she began drinking, behaving erratically, disappearing for days at a time, and generally providing the fodder the paparazzi loves. I got a distinct Lindsey Lohan/ Britney Spears in the early to mid aughts vibe from this.

Sam thinks Fiona is still an irresponsible wild child and is surprised to discover that she isn’t the person he thought he knew. Fiona wants to avoid celebrity, but her attraction to Sam blooms into something more. The bleak moment occurs when Fiona has to reconcile Sam’s feelings for her with his financial need for her to do the show.

Much later, like the very end of the novel, we find out why Fiona had her self-destructive spiral.

Fiona was being groomed by one of her older, male costars who played her dad on the series. There’s some ambiguity as to whether they had sex before she was eighteen, but regardless the relationship was inappropriate and abusive. Fiona couldn’t get out of her contract so she torpedoed her image to get fired. That male costar never suffers any consequences for his behavior.

That is a lot to process at the end of a book. We know that Fiona has done a lot of therapy and has been working on this so she can live a happier life, but as a reader I was given no time to process that trauma myself. Additionally the book just kind of …ends? We never really know if the reboot is going to happen (I assume no) or what happens to Sam financially. Does he get another job? Does he lose his Tesla?

The set up for this novel was great, but the end just sort of fell off a cliff. I walked away needing answers and feeling like trauma was dumped on me. Even as a huge fan of celebrity romance, it wasn’t worth it.

Sparks fly and things get real in this sharply sexy and whip-smart romantic comedy set against the backdrop of a post #metoo Hollywood from New York Times bestselling author Katie Cotugno–page-turning escapist fun in the spirit of Beach Read, The Kiss Quotient, and Red, White and Royal Blue.

Former child actor Fiona St. James dropped out of the spotlight after a spectacularly public crash and burn. The tabloids called her crazy and self-destructive and said she’d lost her mind. Now in her late twenties, Fiona believes her humiliating past is firmly behind her. She’s finally regained a modicum of privacy, and she won’t let anything–or anyone–mess it up.

Unlike Fiona, Sam Fox, who played her older brother on the popular television show Birds of California, loves the perks that come with being a successful Hollywood actor: fame, women, parties, money. When his current show gets cancelled and his agent starts to avoid his calls, the desperate actor enthusiastically signs on for a Birds of California revival. But to make it happen, he needs Fiona St. James.

Against her better judgment, Fiona agrees to have lunch with Sam. What happens next takes them both by surprise. Sam is enthralled by Fiona’s take-no-prisoners attitude, and Fiona discovers a lovable goofball behind Sam’s close-up-ready face. Long drives to the beach, late nights at dive bars . . . theirs is the kind of kitschy romance Hollywood sells. But just like in the rom-coms Fiona despises, there’s a twist that threatens her new love. Sam doesn’t know the full story behind her breakdown. What happens when she reveals the truth?