The Rake Gets Ravished by Sophie Jordan 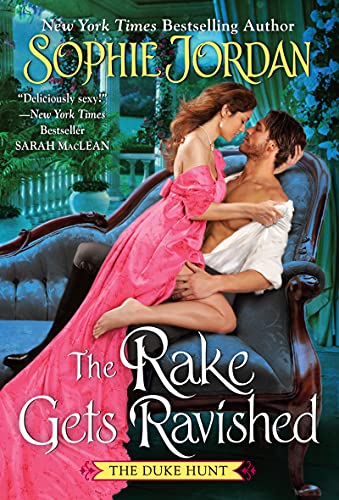 The Rake Gets Ravished

I could practically hear Luisa’s song from Encanto (Surface Pressure) playing in my head as I read this book about an older sister who shoulders all of her family’s burdens.

Mercy Kittinger raised her younger sister, Grace, after their mother’s death fifteen years ago. She’s managed the family farm, the household staff, and kept her family afloat even though that job was supposed to fall to her older brother, Bede. Bede is more interested in gambling away what little they have, so when he loses the entire farm on a wager in a gaming hell, Mercy has to fix that, too.

Mercy sneaks into the gaming den with the intent of stealing back the voucher that places her family’s property in the hands of the den’s owner, Silas Masters. Then Silas catches her in his room. Mercy is twenty-five, with no intention of getting married, and is fed up with doing everything for everyone else. She’s attracted to Silas and figures this might be her only opportunity to have a little fun. She seduces and thoroughly, thoroughly ravishes Silas before disappearing with the voucher.

Silas can’t forget the woman who rocked his world in the sack, and with his peen like a divining rod figures out who she was and that she stole from him. He shows up at her family farm, not to get the voucher back, but to ensure Mercy didn’t get pregnant during their one-night stand. Silas is a bastard and won’t put that stigma on any child of his own. So Mercy agrees to let him stay until they can confirm she’s not pregnant in exchange for him not pushing the fact that she stole the voucher from him. What results is a lot of sexual tension and a slowly budding romance.

I really enjoyed the sex positivity of this book. Mercy is a virgin when she sleeps with Silas, but she knows what sex is and has read naughty books and has fantasies of her own. She is in control of their encounter and unapologetic about enjoying herself.

As the oldest sister, I also resonate with the theme of bearing more than your share of a family’s burdens. Mercy has been a mother to Grace, and she saves Bede from self destruction more than once. It’s not a job she asked for, but one she feels obligated to do. So when she finally has something for herself (in her affair with Silas) it’s immensely satisfying.

I will say there’s not a ton of external conflict in this book. It’s mostly Silas and Mercy acknowledging that their pants feelings might actually be love, but there isn’t a whole lot preventing them from doing so. Overall it’s conflict-light, sex-positive, and depicts a woman finally taking something she wants purely for herself.

New York Times bestselling author Sophie Jordan returns with an all new sizzling historical romance in her Duke Hunt series about a woman determined to reclaim her family home from the dangerously handsome owner of London’s most popular gaming hell.

The owner of London’s most popular gaming hell, wealthy and powerful Silas Masters is feared by men and desired by women—except Mercy Kittinger. When the blackguard wins her family home in a game of cards, Mercy steals into Silas’s rooms, intent on destroying the proof. But things don’t go to plan…

She would have her way with him…

Caught in the act, Mercy must be bold to save herself… even if it means seducing the dangerous rogue and then disappearing with the dawn, debt voucher in hand. Safe at home and determined to settle back into her quiet, uneventful life, Mercy burns at the memory of her night spent ravishing the most compelling man she’d ever met. Thank goodness she’ll never see him again!

He didn’t see her coming…

No one trifles with Silas Masters. Even if he could forget the dark-haired seductress who undid him, he can’t allow anyone to steal from him. He will hunt down the sultry woman who haunts his dreams and show her just how sweet payback can be.